It is the Rock-cut Bodhisattva statue of 320cm height in the Age of Goryeo, commonly called 'Mireukbau', which was carved on the front side of large granite rock. This Bodhisattva statue with high crown on raises the lotus in his hand and small Buddha is carved inside the crown so as to be regarded as the Avalokitesvara Bodhisattva (the Buddhist Goddess of Mercy) in the early of Goryeo.

This Bodhisattva takes the posture of Bangasang Image (half-crossed legs), with the right leg laid on the blooming upward lotus-like pedestal and the left put on the right knee. The face and body are entirely large and unbalanced, giving heavy tone. The inscription is carved on the rear side of the Bodhisattva statue-carved rock, which makes it possible estimated to have been made in 981, the early of Goryeo.

The local characteristics are entirely strong and the carving skill falls behind. But it is the specific style of the Avalokitesvara Bodhisattva statue (the Buddhist Goddess of Mercy) wearing the Clothes of the Heaven, which is estimated to have prevailed on in the early of Goryeo, surrounding both the shoulders. And it has a high jewel crown on the head and a lotus branch in the hand.

It is the important sculpture of 10th century to comparatively be researched together with the standing stone statue of the Bodhisattva in Gwangdeok-dong, Geumneung (Treasure No.679) 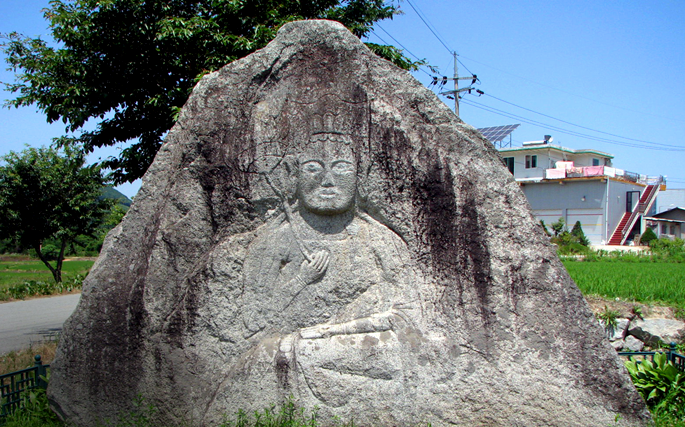