Mt.Seolbongsan is the guardian mountain of Icheon. The site of Seolbong mountain fortress sits on an area of alpine land (covering 30,000 pyeong) on the 7th and 8th ridges of the mountain, in an area commonly called Kalbawi. Embracing a valley, the fortress walls are mostly made of earth, but some parts are made of stone. Most of the stone parts of the wall have fallen or been buried, but below the peak of the mountain, remains of the stone walls, measuring 3 to 10 meters in length, can be seen in some places.

Seolbong Mountain Fortress was a grand-scale fortress of the Three Kingdoms period, as attested to by the remains discovered in the area. Including the stone walls, stone pieces, earthenware fragments, and nine foundation stones are laid out regularly to form a building site 9 meters along the front and 6.3m along the side. The flat land of the western ridge below the summit is assumed to be a command site because of the foundation stones found there, and there are also stones with holes in them, presumably for the colors, and three mounds of stones that appear to have been thrown in battle. Nearby there are also traces of a well, which is absolutely necessary in a fortress, a sluice gate and the northern fortress gate.

The fortress appears to have been built by Goguryeo soldiers between 475 (63rd year of King Jangsu) when Goguryeo defeated Baekje and occupied the area south of the Hangang River, building the town of Namcheonhyeon, and 551 (12th year of King Jinheung) when Silla and Baekje reclaimed the area. From the summit there is a clear view over the surrounding area where fierce battles for power were waged from the Three Kingdoms period; hence, the fortress was strategically located to serve as a very important military role. 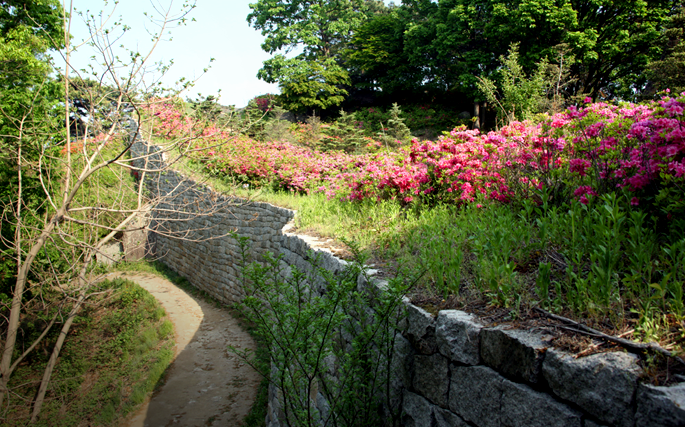